The Mannerheim Museum archive consists of Gustaf Mannerheim’s personal archive and the photo archives. The identity archive of Gustaf Mannerheim, owned by the Mannerheim Foundation, is kept in the National Archives of Finland. The archive includes letter correspondence, memoir scripts with background material, documents related to activity, newspaper clippings and biographical material and other material from the years between 1867-1951. The archive can be accessed with permission of the Director of the National Archives. A part of the archive is located in the Mannerheim Museum.

Orders of the day of the Commander-in-Chief

In the military, it is customary to inform troop divisions, units and individual soldiers by orders of the day drawn up by a superior.  At the unit level, information is targeted at everyday work and leisure. The higher one progresses in the hierarchy, the more general nature the content of the orders of the day gets.

At the start of the Winter War, Field Marshal Mannerheim was appointed Commander-in-Chief of the Finnish Defence Force by the President of the Republic. Mannerheim gave the news of nomination to the Defence Force in his first Winter War order of the day No 1/1 December 1939. As with other orders of the day, the assistants, according to the instructions he gave, drafted a sketch, which he then edited to have his personal stamp on it. His inimitable, concise and expressive style reaches the reader to this day. 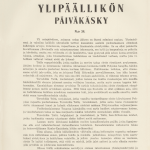 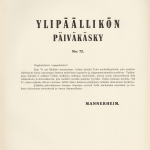 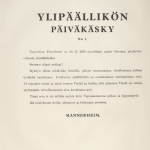 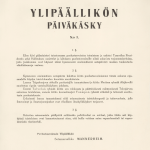 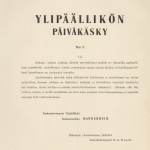 The National Address was handed to Gustaf Mannerheim in early 1920. The national gift consisted of approximately 300 000 signatures in 12 volumes and a sum of money, 7.6 million Finnish marks (equivalent to about 3 million euros today). The gift was dated July 25, 1919, the same day that Mannerheim lost in the first Finnish presidential election to Professor K. J. Ståhlberg.

When the General was stepping aside, people wanted to thank him for his work for an independent Finland — for leading the White Army to victory and for the period of regency. The petition to the Finnish people, which, with the signatures of 24 front-row Finns, was published in the daily newspapers the next day, was the prelude to the gathering.

The gathering was organized according to region with special lists with the text, Kansallisadressi Kenraali Mannerheimille – Nationaladressen till General Mannerheim, in the upper right corner.  There is a request on every page to return the lists to Mrs. Ida Blomqvist, chairman of the collection committee. Lists toured more or less freely in neighbourhoods. The original spellings, as well as the division into the provinces, have been retained.

Signatures can be roughly divided into three parts: signatures written in one’s own hand, names written by others, as well as companies. The signatures written in one’s own hand make up the majority. Most of the signatories have added a profession or title along with the writing. The signatures show that different layers of society are well represented — from cottar to count, handmaid to judge of the Court of Appeal. In some cases, multiple names have been written by the same person. Entire families are most often included — The National Address is therefore not only signed by the heads of families, something that has sometimes been claimed. Corporate stamps can be found, especially in Helsinki.

Now that one hundred years have passed since the Great National Address was handed over to Mannerheim, its twelve volumes are opened to the public. Examining signatures will get a good picture of the professional groups of the new-born republic. You can also find signatures of your own relatives.

In the summer of 2016 museum director Kristina Ranki initiated a project to preserve and restore the National Address and digitise its signatures. The Finnish Heritage Agency supported the project. The conservation was done by conservator Anna Aaltonen. The digitalization and research were done by museum guide, Marja Englund, M.A.

The digital archive in the National Archives of Finland got the honour to store the National Address on the 150th anniversary of Mannerheim’s birth. 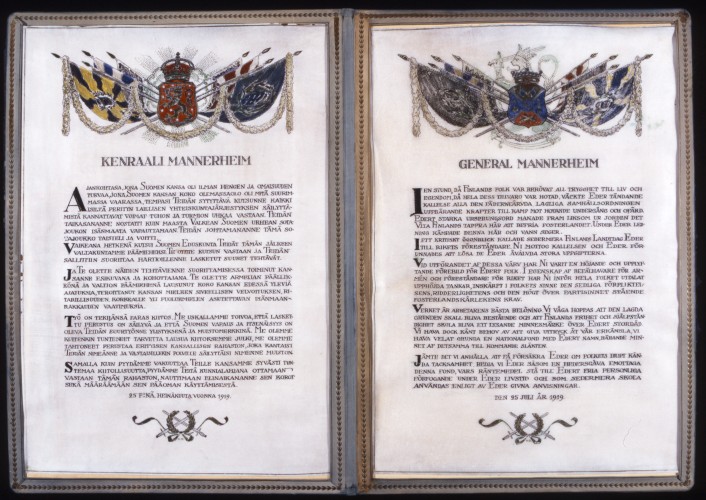 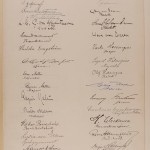 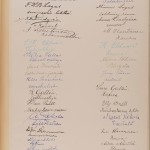 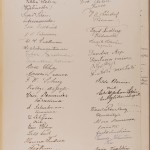 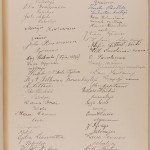